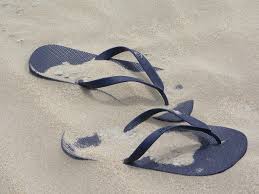 My ‘slip’ into HIS Slippers

It was a sojourn for me to the pre-independence era while flipping through the pages of my grandfather’s diary last night.

The sound of the train running rapidly on the rails whilst the icy breeze hits you with its dewy fragrance; it has been justly said that there is no place better than lush gardens to enjoy ones linking to the divine.

As the train passed numerous wheat fields that day, I sat hush lipped inside my bogie taking in the aromatic air and mesmerizing scenery, a middle-aged man walked inside and took a seat right next to me.

Just as anyone else I observed him from top to bottom. He was a lean man with round glasses and a wheatish-complexion. He also had a wooden walking stick in one of his hands and held his train ticket in the other.

The ticket said ‘Gandhi’ and instantaneously I grasped the fact that he is the one being followed by our entire nation currently. I was aware that he travels in trains a lot but I never in my wildest dreams could have envisaged that I’d have a chance to witness such a glorious man in person.

A sharp whistle of the train broke my train of thoughts and I witnessed a very strange thing about him, he was wearing only one slipper, his other foot was bare. A few minutes after he sat down, someone from the railways crew came and apologetically said to Gandhi that could not find his lost slipper in the field.

The train had halted sometime back and that’s when Gandhi stepped in. It was still stopped, and the whistles of its resumption were blinding my ears. Just as it began to stride very slowly, Gandhi stood up, removed his only slipper, and threw it out the train door.

I was perplexed as to this reaction as I thought he must be angry at the man for not being able to locate his slipper in a not so dense field.

Little did I know then that when would be asked the similar query another co-passenger.

And he would smilingly respond saying, “I didn’t want any stranger to find only one slipper in the field. I’d rather like the stranger to have a pair”.

I had heard people saying, “Gandhi means EMPATHY”. I was self-illuminated WHY!

Suddenly, the doorbell rang, and I was back in the 2nd October 2020, morning. My spectacular sojourn through the pages of my grandfather’s diary to our pre-independence, Gandhian Era was over.