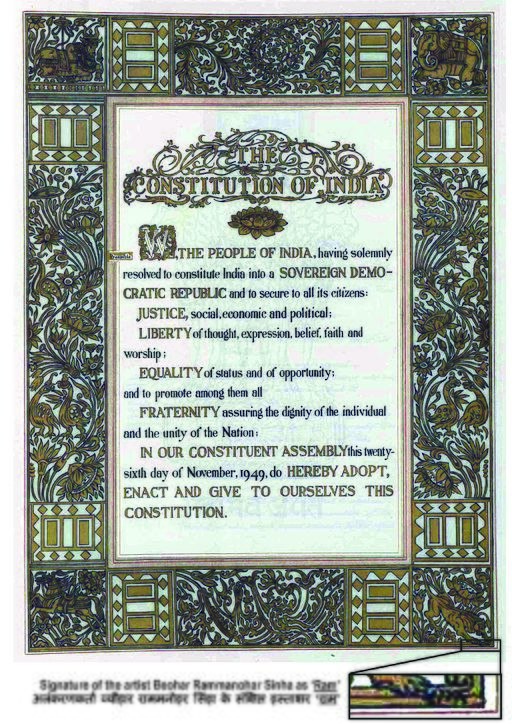 Shaurya is eagerly counting the bus stops to get down from his school bus. He is struggling to hold his excitement about what his teacher has ‘disclosed’ to the class about the ‘rule book’ (Read ‘Constitution) of our country – India.

He wants to reach home and tell everything to his parent to, especially his Papa – Naresh, a lawyer by profession.

The bus reaches the gate of his hosing society. He deboards. Runs to his home and hugs his Papa …

“WE, THE PEOPLE OF INDIA, having solemnly resolved to constitute India into a SOVEREIGN SOCIALIST SECULAR DEMOCRATIC REPUBLIC and to secure to all its citizens:

EQUALITY of status and opportunity,

and to promote among them all,

FRATERNITY assuring the dignity of the individual and the unity and integrity of the Nation;

IN OUR CONSTITUENT ASSEMBLY this 26th day of November 1949, do HEREBY ADOPT, ENACT AND GIVE TO OURSELVES THIS CONSTITUTION.”, Shaurya recites everything to his father!

” Papa, our teacher told us everything about the RULE BOOK of our country, he exclaimed!

” Yes Papa. I will do everything to live up to all the ‘rules of our country’s rule book’…. Ok Ok , CON-STI-TU-TION.”, Shaurya chuckled ecstatically.

As the father-son duo was talking, Ramesh, a 10-year-old lad – their maid, Sarita’s son, was was sweeping the floor.

“Papa, if equality is such a prominent concept in the constitution of our country and one of the fundamental rights of every citizen of our nation as well, then why Ramesh doesn’t go to school as I do? Shaurya asked innocently.

Shaurya’s question, struck hard to both – Naresh and Ramesh.

Naresh felt guilty of allowing Sarita to let her son assist as a domestic help by depriving her young kid of his rights to education. He felt ashamed of snatching away the bright future Ramesh just for his own family’s comfort.

Naresh could not sleep the whole night, pondering upon Shaurya’s question!

Finally, next morning, he came up with a SOLUTION.

“Sarita, Ramesh is getting admitted to Shaurya’s school.  We will sponsor his education.

Sarita was in tears, falling to the feet of Naresh, she said, still sobbing, “Thank you, Saheb, he will not let you down! He will study with all the dedication. We will remain indebted to you for this.”

Naresh looking direct in the eyes of his son, Shaurya’s and declared with a broad smile, “I am not doing you any favors, Sarita. I am just trying to be a real LAWYER by upholding our country’s RULE BOOK!

Want to read more short stories like this (Our Country’s Rule Book)? Check out our Short Stories page, here you will find more such content.